Weevils in the Flour: An oral record of the 1930s depression in Australia by Wendy Lowenstein The classic account of the Burke and Wills expedition across Australia and the fated drama that took place at Cooper's Creek in the remote interior of the continent in 1861.More than any other incident in Australia's history the story of Burke and Wills - familiar to every Australian schoolchild - evoke s the memory of the early settlers and the seemingly insurmountable odds they sought to overcome. From the days the expedition set off from the rich, gold-rush town of Melbourne through the triumphant crossing of the continent to the heartbreaking return to base camp at Cooper's Creek, this is an epic adventure in the grand manner told by a master. ...Show more 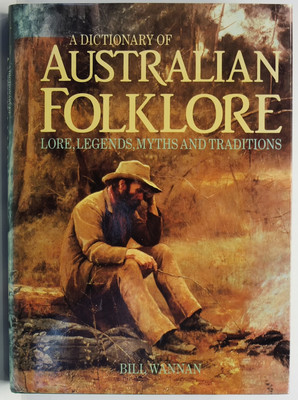 A Dictionary of Australian Folklore by Bill Wannan

The Letters and Journals of Samuel Marsden 1765-1838, senior chaplain in the colony of New South Wales and Superintendent of the Mission of The Church Missionary Society in New Zealand by John Rawson Elder (ed.) The Contented Botanist. Letters of W. H. Harvey about Australia and the Pacific by Sophie C. Ducker

Ten Feet Tall and Not Quite Bulletproof: Drug Busts and Helicopter Rescues: One Cop's Extraordinary True Story by Cameron Hardiman

Cameron Hardiman lived a life most young boys could only dream of. Every morning he put on a navy blue police flight suit, grabbed his flight helmet, and prepared to work on the police helicopter. He could be called to anything during a shift, to search for a missing child, to pull an injured driver fro m a wrecked car, or a dangerous sea rescue. He saw his fair share of trauma and dealt with it like most coppers would: he quickly put each dangerous job out of his mind as soon as it was over. But one particular rescue job in Bass Strait brought about a reckoning - and Cameron was never the same again. This is the brilliantly told, white-knuckle story of one cop learning every lesson the hard way - and coming to find out that being not quite bulletproof doesn't mean that you're not a good cop. ...Show more From the acclaimed author of The Suitcase Baby and The Suicide Bride, the story of a series of horrific murders that began in 1930s Sydney - and a killer who remained at large for over two decades. In December 1932, as the Depression tightened its grip, the body of a woman was found in Queens Park, Sydn ey. It was a popular park. There were houses in plain view. Yet this woman had been violently murdered without anyone noticing. Other equally brutal and shocking murders of women in public places were to follow. Australia's first serial killer was at large. Police failed to notice the similarities between the victims until the death of one young woman - an aspiring Olympic swimmer - made the whole city take notice. On scant evidence, the unassuming Eric Craig was arrested. But the killings didn't stop... This compelling story of a city crippled by fear and a failing economy, of a killer at large as panic abounds, is also the story of what happens when victims aren't perfect and neither are suspects, and when a rush to judgement replaces the call of reason.   ...Show more The Explorers: Stories of Discovery and Adventure from the Australian Frontier by Tim Flannery

A lively collection of extraordinary stories of adventure and discovery, The Explorers tells the epic saga of the conquest and settlement of Australia. Editor Tim Flannery selects sixty-seven accounts that convey the sense of wonder and discovery, along with the human dimensions of struggle and deprivat ion that occurred in the exploration of the last continent to be fully mapped by Europeans.Beginning with the story of Dutch captain Willem Janz's 1606 expedition at Cape York -- the bloody outcome of which would sadly foreshadow future relations between colonists and Aboriginal peoples -- and running through Robyn Davidson's 1977 camelback ride through the desolate Outback deserts, The Explorers bristles with the enterprise that Flannery explains as "heroic, for nowhere else did explorers face such an obdurate country". ...Show more