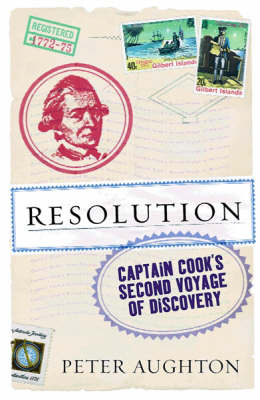 The story of Cook's amazing second voyage of exploration. A year and a day after James Cook arrived back on English soil having claimed Australia and New Zealand for the British crown, he set sail again on a three-year journey (1772-1775) that still remains the greatest exploratory voyage ever undertaken in the far Southern waters of the Indian, Pacific and Atlantic Oceans. His was the first ship ever to cross the Antarctic Circle, and no sailing ship since has ventured further south through the ice. This is a colourful and exciting story of the crew and their life aboard the Resolution and the adventures that occurred whenever they landed on exotic islands and coasts such as Tahiti, Easter Island, the Tonga Islands and above all the snow, fog, treacherous ice and blizzards of Antarctica.

A tale of endurance on the high seas - cannibalism, discovery, new lands and new peoples - this book has it all 'Aughton's brisk, clear-eyed narrative arrestingly lets the tale speak for itself' Robbie Hudson, Sunday Times 'An enticing story of southern exploration, pierced by cannibalism and mean-spirited quarrels' New Scientist Praise for ENDEAVOUR: Chapter by chapter Peter Aughton gives us new insights into this epic voyage, the people who took part and the places they put on the maps of the western world...a masterpiece of interpretation.' David Bellamy Aughton is a passionate advocate but never a sentimentalist. First-rate.' The Yorkshire Post 'This book has to be one of the most gorgeously produced non-fiction titles in this genre you will see for a long while. As a physical object, Aughton's "Endeavour" is superb - from the quality of the paper, to the typography, to the richness of the reproductions' Amazon