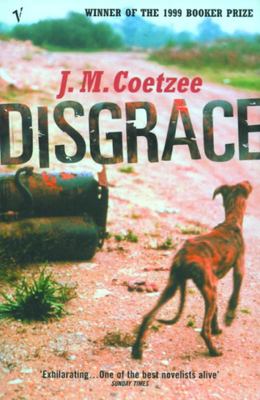 "INCLUDES A READING GUIDE After years teaching Romantic poetry at the Technical University of Cape Town, David Lurie, middle-aged and twice divorced, has an impulsive affair with a student. The affair sours; he is denounced and summoned before a committee of inquiry. Willing to admit his guilt, but refusing to yield to pressure to repent publicly, he resigns and retreats to his daughter Lucy's isolated smallholding. or a time, his daughter's influence and the natural rhythms of the farm promise to harmonise his discordant life. But the balance of power in the country is shifting. He and Lucy become victims of a savage and disturbing attack which brings into relief all the faultlines in their relationship."

Winner of the 1999 Booker Prize

" The richness of Disgrace lies in the elegant and allegorical role reversals, the spare symbolism of the language and in the characterization. We may not like David Lurie, but in Coetzee's skillful hands we can't dismiss him without pity." -- "The Globe and Mail"
" Coetzee is able to dissect the human psyche with a surgeon's touch." -- "The Hamilton Spectator"
" Marvellous." -- "The National Post"
" Disgrace is a subtle, multilayered story, as much concerned with politics as it is with the itch of male flesh. Coetzee's prose is chaste and lyrical -- it is a relief to encounter writing as quietly stylish as this." -- "Independent"
" Disgrace is at the frontier of world literature." -- "Sunday Telegraph"
" J.M. Coetzee's vision goes to the nerve-centre of being. What he finds there is more than most people will ever know about themselves, and he conveys it with a brilliant writer's mastery of tension and elegance." -- Nadine Gordimer